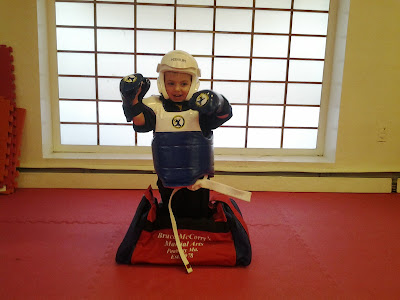 For a long time in human history, martial arts was considered an adult affair. May be because of its origins in ancient spiritual traditions and warrior cultures, it was mostly thought of as a serious activity of adults. This might sound appalling to a modern observer of martial arts, whose exposure to Hollywood and martial art schools have created the impression that martial arts is a genuine child's affair.

This huge transformation in perspective came about in the beginning of the 20th century. It was during these decades that martial arts became globally popular, and much research went into it. The scientists unearthed unrevealed facets of martial arts – its amazing potential in the fields of health, fitness, confidence-building, character formation and self-defense. Once it was realized that children need these as much as adults, children's martial art emerged.

One Step Further: Preschool Martial Arts
The preschooler age from 3 to 6 was by then highlighted by experts as the age in which the foundations of a child's future was laid. It was discovered that martial arts could help with the formation of physique and character in a preschooler. It was only some martial arts institutions which kept themselves updated with the latest developments in the scenario that took into preschooler martial arts. Bruce McCorry's Academy (Peabody MA) was a major name among them.


With the realization that the Little Ninjas program has virtually reshaped the lives of children for years, Bruce McCorry's Academy decided to constitute preschooler program to a new wing, equipped with a structured scheme, safer and friendlier atmosphere and more facilities. Today, the Little Ninjas program has become one of the most loved preschooler courses in Massachusetts. It continues to inspire parents and children, and young enthusiastic little champs flock to be a part of the program every new session. Now it is your chance to obtain the benefits of preschooler martial arts to your child. Choose the best for your child at the right age!  Call today! 978-535-7878 Enrollment is open.