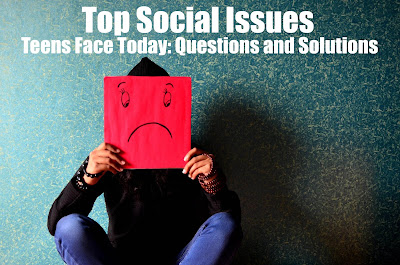 We are in a technocentric world like never before. Technology has seeped into every aspect of our lives, and the lives of teenagers are no exception. That every teenager spends 9 hours a day in front of gadgets, and that they live in a highly competitive, socialized and networked world means that the problems with which the teens struggle these days are radically different from what characterized teenage twenty years back. Here are some of those most pressing concerns, and what can be done to save our youngsters from falling prey to them:

Depression: Depression has become one of the most common teenage perils, which affects at least 20% of the population before they reach adulthood, pushing them into self-harming behavior and lack of motivation.

Risky Sexual Behavior: Given that more than half of the victims of sexually transmitted diseases where young adults, risky sex makes another serious issue with which teens struggle these days. It also often pushes teens into unintended pregnancy and render them unable to indulge in a healthy relationship in future.

Substance Abuse: With 33.2 per cent of high school seniors indulging in alcohol use, the lines between use and abuse is quite blurry when it comes to teenage alcoholism. The same can be claimed for drug abuse as well. With the high risk of developing addiction at any moment, drug abuse is a crucial issue that teens of today have to navigate.

Bullying and Peer Pressure: According to latest statistics, bullying has touched an all-time high in American schools, and peer pressure is no less a danger. Both bullying and peer pressure are the trigger to much dreaded and lasting consequences, thus being a difficult concern for many teens out there.

Study Stress: It is alarming to note that a large number of school dropouts today are not socially marginalized or academically incapable, but also kids unable to keep up with the mounting academic pressure put on them by the system. Hence study stress is another grave struggle for todays’ teens.

Technological Perils: The dangers brought about by social media include exposure to unhealthy content, getting into risks that can be financial or sexual, exposure to cruelty and violence, inappropriate acquaintances and so on. Hence the dangers of using technology is something that teens often face.

Martial Art as a Solution to the Problems Faced by Teens
It might be audacious to state that there is actually one solution to these diverse concerns, but it is not an exaggeration. Introducing your child to martial arts can be a one-time solution for these diverse issues that mark their teenage. In a good martial art school like Bruce McCorry’s Academy (Peabody, MA), professional martial art is used to instill confidence, self-worth and self-esteem in teens, helping them to stay away from peer pressure and risky behavior. The mental benefits of martial arts can resolve the insecurities that push teens into substance abuse and depression. Martial arts can also improve faculties which are crucial to academic performance such as memory.

Through martial arts, children can learn how to defend themselves, learn to be aware of the perils that surround them, and grow up as emotionally strong individuals who can deal with challenges that life throws at them.

Posted by Bruce McCorry's Martial Arts at 9:04 AM