Bruce McCorry's Martial Arts Academy in Peabody Ma was established in 1978
and has been focused on creating a school which thrives on experience,
discipline and establishing self esteem in all its students. They have
several programs appealing to a wide variety of interests. Traditional
martial arts such as Taekwondo and Kung Fu are featured along with
relaxing methods like yoga and Tai Chi Chuan. For those interested in learning
different martial arts and some gymnastics combined, there is Xtreme
Martial Arts (or XMA). Cardio Kickboxing is offered to those who are
interested in high intensity focused workouts.

Tae Kwon Do, originating from Korea, is known for strong foot techniques
and high kicks. Both adults and children learn focus, respect and control.

Kung Fu is a martial art from China that has existed over 4,000 years.
It's focus on physical and mental training has been handed down through
generations.

Mixed Martials Arts (MMA) is a full contact combat sport that allows a
wide variety of fighting techniques from a mixture of martial arts
traditions and non-traditions used in competitions. Train like the
professionals without the injuries with their safely designed MMA
Programs.

In addition, there is a summer martial arts programs that not only
includes classes but two field trips per week, playing games and learning
arts and crafts, complimenting other group activities.

All programs help children build self confidence, self discipline, improve
concentration and a healthy, positive attitude.

Also featured is an after school program nationally recognized (AMP). This
program (After School Martial Arts Program) has been developed by
educators incorporating confidence building and fun games. Often parents complain
about the habits picked up at day care centers by their children but after
joining this program, the parents see positive changes in their behavior.
Another great selling point of this program is that the children are
picked up at their school and brought to the academy. The costs are the same as a
day care program and parents can be reassured their children are in a safe
environment. 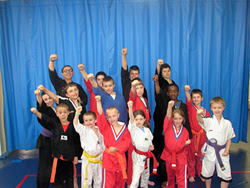 Bruce McCorry's, unlike other martial arts schools, has a program focusing
on students with special needs such as autism, Down Syndrome and ADD.
These programs have been successful in assisting with self confidence and group
participation.

Bruce McCorry has over 45 years experience in studying and teaching
martial arts. Mr. McCorry specializes in the art of Taekwondo amongst
other forms of martial arts. He also studied under and remains affiliated with
one of the Grand Masters. He also specializes in a different kind of Kung
Fu and Tai Chi, earning high level master accomplishment in 1982. In
addition, he has studied in China and Brazil. Mr. McCorry has earned many
awards for his focus on the martial arts community and special needs.

All instructors at this martial arts academy have trained over 10 to 24
years of teaching experience.

Why not register today for a free introductory course? There is no
obligation - you can get a sense of what this long established, highly
reputable martial arts school has to offer.

This well established academy is located at 220 Newbury Street, Peabody,
MA. They can be reached by phone at 978-535-7878 or email:
info@brucemccorrys.com
Posted by Bruce McCorry's Martial Arts at 2:45 PM