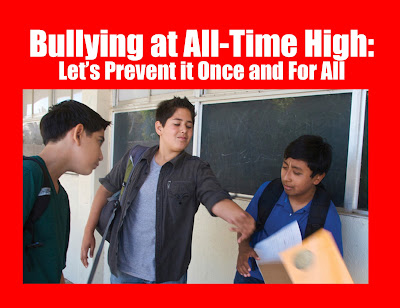 For a few decades now, there has never been a year when instances of bullying has not been reported from American schools. However, things are worse than ever before according to the Stomp Bullying initiative, which reported that with 1 out of every 4 child in USA being bullied, bullying is at an all-time high in American history. According to these stats, about 43% of children have experienced cyberbullying, and 5.4 million children bunk school fearing harassment and bullying every day. The statistics call for the fact that it is finally the time to prevent it once and for all, and it is high time that everyone including parents, teachers and other concerned adults acted in order to stop bullying.

Why Be Concerned: The Menace that is Bullying
Are tiffs between children quite a common part of the school life that shouldn’t really be blown out of proportion? Often we find that question being asked when bullying is discussed. Especially when the perpetrators’ family and friends try to defend them, it is an oft-heard argument that what happened was a minor tiff, and not bullying. Such questions come out of one’s ignorance of bullying and the damage it can ensue. It is quite easy for a common tiff between kids to escalate into bullying given that the power relations might be unequal in most interactions. Such defenses will not be heard once we realize that bullying is as much damaging to the bully as it is to the victim.

It is noted by child experts that most children who become part of bullying, whether as victims, perpetrators or onlookers are bound to go through lasting psychological damage that may leave them unable to function properly in adult social interactions and in building relationships. Bullying can lead to serious repercussions like anxiety disorders, stress, trauma, and depression for anyone involved. Those who become part of bullying as victims and bullies are likely to take to dysfunctional behavior, substance abuse and violence in later life. It can even lead to suicide and mental derangement if not prevented. To add to everything, the bully too is a victim here in the sense that he/she must be a victim of insecurities, psychological issues and vulnerabilities to be a bully in the first place. Hence the bully too deserves help as the victim does.

Martial Arts as a Solution: Saying No to Bullying for Ever
If there is a lasting solution that can help both the victims and perpetrators of bullying alike, it is martial arts. In professional martial art schools like Bruce McCorry’s Academy (Peabody, MA) which offer special programs for child learners, often bullying comes into focus. Under trained instructors, martial arts can be effectively used to help the victim get over the trauma and stress caused by past bullying, thus preventing lasting damage. Martial arts can also help bullies to reroute their penchant for aggression and violence into positive routes. As martial arts help children in general to build confidence, stay out of harmful behavior, gain emotional strength, courage and learn self-defense, it is the once-and-for-all solution to bullying.

If you are eager for your child to have a safe, happy and bullying-free childhood, introduce them to martial arts today.

Posted by Bruce McCorry's Martial Arts at 9:17 AM