The Momo Challenge and Martial Arts as Resistance

Educating and Empowering Kids:
The Momo Challenge and Martial Arts as Resistance 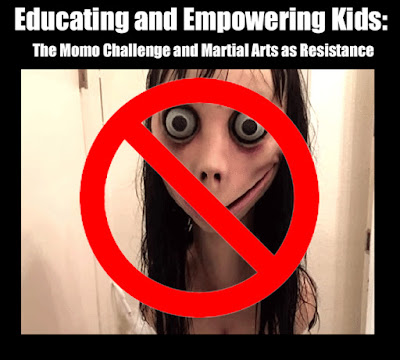 Almost a year ago, precisely in July 2018, Momo Challenge, the social media challenge that apparently compelled children and adolescents to perform a range of dangerous and harmful tasks left parents and the news watchers across the world bewildered. The Momo Challenge triggered panic not just because of several reports of teen suicides from different countries, but also because it was eerily similar to the Blue Whale Challenge, the notorious social media game that led several children and teenagers into harming others and committing suicide since 2016 itself. Both these challenges reproduced the same, insidious pattern: luring young, vulnerable users into playing the game; coercing, manipulating and at times blackmailing them to perform tasks that are extremely dangerous for the player and the society; and eventually leading to serious consequences like suicide and assault.

The Dangerous Games: Kids and the Lure of Danger
Most of the children who succumbed to dangerous games like the Momo Challenge were emotionally susceptible by virtue of their age. Child psychologists have noted time and again that at least since the age of 13, children are more susceptible to tasks and deeds that demand courage and risky behavior from them. It is not just the allure of danger and risk that convinces them to seek dangerous tasks, but also the heroic sense of fulfilment which comes out of it. Peer pressure too plays a central role, as saying no to risky challenges can seriously affect the social image of kids among their same-aged peers.

In addition, it has also been noted that pre-teens and teenagers are more emotionally susceptible to external influences. Therefore, it is no wonder that programs like the Momo Challenge and the Blue Whale game, designed to manipulate and influence the behavior of vulnerable children through several tactics that are psychologically damaging managed to lure many kids from across the world in spite of the several warnings that were issued by governments and organizations. The panic roused by the Momo Challenge should compel every parent to think seriously about educating and empowering their children to resist such devious digital platforms and spaces.

Martial Arts as Resistance: The Short Cut to Empower your Children
In a world where kids will not want to listen to anyone’s advises or warnings, how exactly can you equip your child to face and resist dangers like the Momo Challenge that lurk in the digital space? A feasible answer is martial arts. In professional martial arts schools that offer programs for children, teenagers and young adults, the focus is not just on physical activity, but also on psychologically empowering them. For instance, at Bruce McCorry’s Academy (Peabody, MA), one of the premier martial art schools in Massachusetts, you will find programs for children and teenagers specially designed to strengthen their emotional stability, help them gain presence of mind, and help them stay rooted to everyday activities that matter. Martial arts effectively diverts the teenage lure for risk and danger into positive channels like competitive spirit, physical action and moral values. Helping them to grow up as strong individuals who resist damaging lures of the internet can only be done through martial arts. Empower your children by gifting them the chance to learn martial arts!