My Life with Polymyositis – Sandra LaRosa

After a martial arts session in August 2013, one of my students, Michelle came to me and told me, “Sandra, you are so strong!” Now when I think, her words make me wonder what everyone will say if they knew what really happened… Thank You Michelle, for making me tell this story. 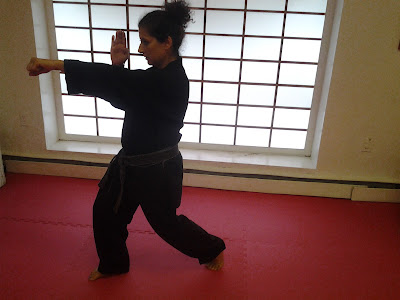 From my teenage, I was attracted to martial arts. In my 20s, I started learning it, and by the age of 30, I had become a martial art practitioner and a bodybuilder. I gave up my career in restaurant management to become the director and teacher at a martial arts academy.
When it all started, I was 42, quite healthy for a woman of my age. Suddenly, I started feeling something wrong with my health. I was feeling more tired than usual, and my muscles were becoming stiff. I associated it with normal ageing problems that most post-forty year old women face. Even when the tiredness started hampering my classes, I said to myself again and again that it’s because of my overwork.
Finally, I decided to seek medical help. My doctor tested my blood, and ruled out the possibility of any serious disease. However, my thyroid level showed some difference, and this was pointed out as the possible reason for tiredness. I was given some medicines.
After a few sittings, I made an appointment with an orthopedic who insisted that I should consult a neurologist for an expert opinion. Exhausting blood tests and muscle tests showed that my CPK count was above 8000 (the normal is below 200). A biopsy finally revealed the truth: I had a serious muscle disease, Polymyositis.

The Beginning of a New Journey…

The news destroyed me. All the scans, bone tests, blood tests and constant visits to the doctor made it one of the most difficult times of my life. My greatest support during these tiring times was my best friend and partner, Bruce. Though the journey was tough, he had a great role in making it a success. In the beginning, I was constantly seeking and searching for answers, always frustrated – but finally, I took a decision: to switch off my computer and move on. 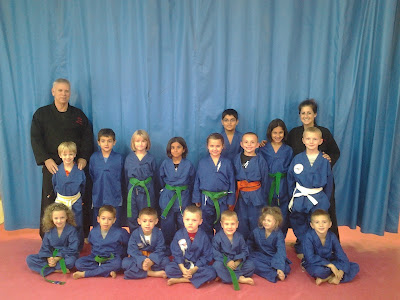 It was already December 2008, and things had changed. I found it difficult to walk long distances; I needed the support of the railing while climbing stairs. I couldn't raise my arms above my head and had difficulties in digestion. My CPK count remained above 8500. I was confused and at times, sorry for myself. I was not always positive, though I tried to be. There were some who even wished that I wouldn't recover, but the positive presence of my supportive friends always guided me through.
Getting to Know My Disease…

What exactly causes Polymyositis is still a mystery to doctors. It attacks the immune system by destroying body tissues. It is supposed to cause pain and tiredness. From what I have known, the severity of symptoms differ for different persons.

Striding Through the Tough Times: Medicines and Support…

I had taken a decision: I will not give up anything. I embraced life, both work and play alike, and my stubbornness led my way. My life became a lot like a Rubik’s Cube, trying to juggle the pieces – work, martial art classes, doctor’s appointments, blood test, infusions – into their slots.
Though the side effects of the medicines tried to scare me, in the end, it was not as bad as I expected. My lifestyle choice rested on a trio - diet, workout and medicines. Prednisone, a drug used to treat body inflammation, is what I would call the Miracle Drug. Though the 60mg dose made me look puffy, I didn't really gain weight. My stomach got upset on another drug named Methotrexate, an anti-rheumatic medicine. What really handed me my life back was a drug called Rituxan, though I was allergic to it initially. Also known as Rituximab, it is an immuno-suppressant, used to cure b-cell leukemia and b-cell non-hodgkin lymphona.
I should thank my support team.  The MDA (Muscular Dystrophy Association) who helped me back to life. The staff gave me their full support, and was there for me whenever I needed anything. Though I was initially treated by a single doctor, I soon had an entire team looking after my health. Dr. Amato, an experienced neurologist from Brigham and Women’s Hospital in Boston took the helm of my treatment. His knowledge and treatment methods assured me that I was in safe hands. Another great doctor was Dr. Beauprea, the rheumatologist from Harvard Vanquard in Peabody MA. Frequent visits to Dr. Beauprea kept me up to date on tests in-between my trips to Boston MA with Dr Amato. Whenever I was sad and confused, Dr. Haley and her nurse Joanne from Harvard Vanquard were there for me as great pillars of support.

Winning the Battle through Martial Arts… 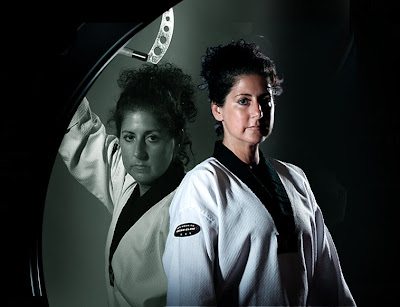 My disease required physiotherapy. However, my doctors opined that my martial arts practice would be a great alternative. In fact, it was martial arts that kept my muscles from getting weakened further. Practicing Kickboxing helped me to remain strong. My balance, speed and coordination improved as a result of Taekwondo sessions. The stretching moves helped me to get rid of stiffness and made by body flexible. The breathing exercises that I practiced as a part of Tai Chi and Qui Gong did the benefit of a meditation. In short, martial arts were what kept me stress-free even during the hours of difficulty.

My life goes on as if nothing has happened. I teach martial arts and concentrate on the positive things in life. At times, I hear an inner voice speaking: “the disease can be treated, but not cured”. However, I am resolved to fight. The days when I feel unwell are getting fewer and fewer nowadays, and I’m sure there will be even fewer of them in future. 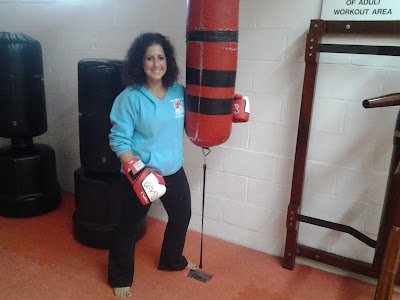 Sandra can be contacted at info@brucemccorrys.com