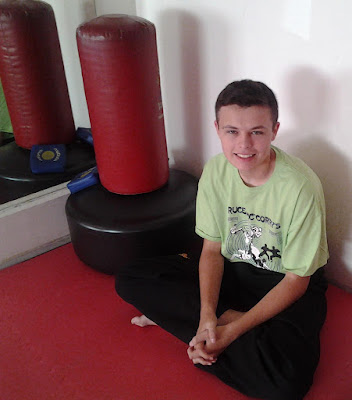 For many, it takes time to recognize one’s passion, and to understand what you really want to do with your life. That is why the story of Michael Walke, a young and enthusiastic martial artist from Bruce McCorry’s Academy, becomes both inspiring and different. Because, he is one who knew what to do in his life, and stood up for his passion.


As a child, Michael knew that he was not one for usual sports, and his passion was not sports. “I used to believe I was unathletic and that I should not do sports, due to the fact that I did not have any motivation,” says Michael. “People used to tell me that I should do sports, and if I did not have one, I was lazy.” At a very young age, he was brilliant enough to recognize and challenge the way in which people stereotype anything other than sports as an activity of the lazy.

In Michael’s life, the most significant moment of assertion came, when his parents thought he can do well in football. Michael’s remembrance of the incident exudes the thrill of a person who finally came face to face what he/she actually wants. “At the end of fifth grade, I was being forced by my dad to play football,” he says. “My mother and I went to the signup list at the high school. My heart pounded as she grabbed the pen to sign me up. I turned to my mother, pen in hand, and asked for one thing, that I don’t want to do football and whether I could do something else.” When his mother asked then what he would like to do, it became for Michael what he describes the “defining moment”, when he finally made up his mind. “What I said here spelled out what hobby I was going to do the rest of my life. I said Karate.”

As a fifth grader, Michael’s life was only beginning when he decided to spell out his dream. The search for a place where he could learn the love of his life brought Michael and his parents to Bruce McCorry’s Academy. “We found Bruce McCorry’s Martial Arts,” says Michael, with the smile of a winner who knew he reached the right place, “I did not expect in then, but it was all going to change after my first day of Karate”. Bruce McCorry’s became that destination for Michael, where he could learn his art in a professional manner. Lessons at Bruce McCorry’s academy have refined the spark of martial art that was already there in him. This fall, he is preparing for the test for his Black Belt. A young champion, he is moving fast toward success.

In a school essay, where he speaks out his mind on the most defining moment of his life, Michael passionately asks: “How would you feel if you did not know what you wanted to do in life? One of the most important experiences in my life was when I started to do Karate because I knew this is what I wanted to do in my life…” His words, which speak with the genuineness and dedication far above his years, display something which is above the material recognition's and awards. Something which Master McCorry looks for in his Black Belts, something that is rare to find among the kids of his age. The positive spirit that only martial arts can foster in a dedicated student.
Posted by Bruce McCorry's Martial Arts at 4:52 PM